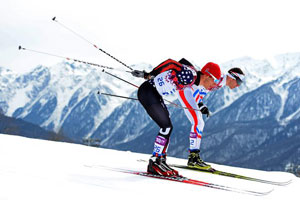 Noah Hoffman, left, and Maurice Manificat of France compete in the men’s skiathlon 15-kilometer classic and 15K freestyle at the 2014 Winter Olympics in Sochi, Russia. (Harry How, Getty Images)

Noah Hoffman, American cross-country skier, was treated at The Steadman Clinic’s Sport Foot and Ankle Clinic for a broken fibula and torn ligament in his left leg. A bad crash while racing in the World Cup in Kuusamo, Finland last week led to Hoffman’s injury.

With hopes of competing in the Feburary 2015 Nordic World Championships in Sweden, Hoffman knew that Dr. Clanton was the right doctor to treat his injury. “He’s the best in the country, maybe the best in the world, in foot and ankle surgical repair,” said Hoffman.

Hoffman received surgery last Thursday at The Steadman Clinic in Vail, Colorado. It will be a while before Hoffman can do weight-bearing training, but he is determined to race in the Nordic World Championships come February. “Noah is a great athlete and a great young man. We have a world-class team of doctors, therapists, and trainers who are working together to help him overcome this injury,” said Dr. Thomas Clanton.