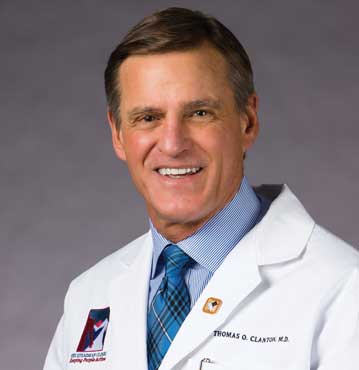 Dr. Thomas O. Clanton is an orthopaedic foot and ankle specialist and Director of Foot and Ankle Sports Medicine at The Steadman Clinic in Vail, Colorado.  He is internationally recognized for his work as an orthopedic surgeon, specializing in sports medicine and orthopaedic problems of  the leg, ankle, and foot. Dr. Clanton joined The Steadman Clinic in August of 2009 after successfully building both a private practice and an academic practice in Houston, Texas, for more than two decades.

As one of only 10 surgeons in the United States, and the only surgeon in the entire state of Colorado, who participated in the FDA Investigational Study of the Scandinavian Total Ankle Replacement, known as the STAR ankle, Dr. Clanton is a pioneer in ankle replacement surgery and began introducing the procedure to patients in 1998.  He is notably one of the most experienced surgeons in the area of ankle replacement and has lectured extensively on this subject and taught both basic and advanced courses to other orthopedic surgeons who are learning the technique.

In addition to ankle replacement surgery, Dr. Clanton is an expert in arthroscopic foot and ankle surgery, and uses this approach for many sports-related, traumatic, and degenerative conditions. Some of these conditions include syndesmosis injuries or high ankle sprains, Lisfranc injuries, Jones fractures, claw toes, bunions and hallux valgus, hallux rigidus, turf toe, navicular stress fractures, traumatic fractures of the foot and ankle, and osteochondral injuries of the talus, to name a few.

Dr. Clanton received his M.D. degree from Baylor College of Medicine in 1976. He then entered and completed a five-year orthopaedic residency program at The University of Texas Health Science Center in San Antonio. Before Dr. Clanton started his own successful practice, he received additional foot and ankle training in Oakland, CA, under Roger A. Mann, M.D., and later trained in knee surgery in Jackson, WY, under the direction of John Feagin, M.D., Ken Lambert, M.D., and Bill Mott, M.D.  In 1984, he was certified by the American Board of Orthopaedic Surgery and has been a Fellow of the American Academy of Orthopaedic Surgeons since 1986.

During his career, Dr. Clanton has held countless academic appointments and has served on a number of committees and organizations, as well as being appointed lead surgeon and/or physician for a number of entities.

Dr. Clanton’s orthopaedic practice has been associated with treating athletes of all levels since day one. This has included a variety of collegiate and professional sports teams and organizations, and has included Olympic and Premier League athletes.  He was a team physician for Rice University for 27 years and still acts as a consultant to them. The Houston Rockets NBA basketball team selected him as their Team Physician in 2005. He was one of the original orthopaedic consultants selected to work with the Houston Texans NFL football team and served in that role from the team’s inception in 2002 until coming to Vail in 2009. He has treated numerous professional and collegiate athletes including Yao Ming, Eddie George, Liu Xiang, Lindsey Vonn, Lance Berkman, David Freese, Anthony Rendon, and Kendrys Morales.

Dr. Clanton has served as host and keynote speaker for countless medical meetings and conferences throughout the world, and he currently oversees the Foot and Ankle Fellowship Training Program at the Steadman Philippon Research Institute where he is the Director of Foot and Ankle Research.  In addition, he presently serves as the Medical Director of the Athletic Training Residency Program at The Steadman Clinic in Vail.

Dr. Clanton and his wife Kay live in Edwards, Colorado, near their two married daughters in Eagle County. He enjoys spending time with his grandchildren, running, skiing, and fly fishing.

One year ago I had an ankle replacement by Dr. Clanton. My entire experience with Dr. Clanton, his staff, the Steadman Hawkins clinic, and the Vail Valley Medical Center could not have been better. Prior to the operation I hobbled with discomfort. Now I have absolutely no pain and have been able to ski, hike, and windsurf. More one could not ask for.

Dr Clanton is my hero, as well as an all around good human. He has saved my ankle and kept it somehow going when no other docs wanted to even touch it for fear I might not walk right again, or at all. I love Dr Clanton and all of his staff! They are world class professionals and people. Thanks for keeping me going so I can chase after my kiddo!

Dr. Clanton is the world's No. 1 if you ask the Aronson family. He reconstructed our daughter Alex's left ankle, and now it is stronger than ever. Alex had chronic ankle failure following years of basketball, running, volleyball, etc. Now she is a Mom, with our Grandson Anders, and running faster than ever. She has to run fast to keep up with Anders. Way to go Dr. Clanton, you are the world's best so far as we are concerned. Please keep up the great work. I am a long time patient of Dr. Richard Steadman, who is now retired. But do not fear, I have had both knees worked on. One total high tech replacement by new hire Dr. Raymond Kim, and one repaired (pulled quad tendon) by Dr. Thomas Hackett. Hey, keeping it all together at the Steadman Clinic! You are the absolute best, and the Aronson family are in full support.

Dr. Clanton and staff did amazing work for me late last October when he did a total ankle replacement. I am now walking with zero, none, nada weight bearing pain! Prior to the surgery I was experiencing severe pain with every step I took. I was to the point of doing very little walking. Thank you Dr. Clanton for the great work! I feel like I got my life back! If you know of anyone that is suffering like I was then have them contact me or better yet, make an appointment with Dr. Clanton at the Steadman Clinic Vail Colorado!

by Stacy Fisher on Thomas Clanton, MD
They have been phenomenal

Here on ski vacation and broke my ankle. They got me in quickly and will be having surgery on Thursday. They have been phenomenal!!

After 2 failed surgeries I went to see Dr. Clanton. He and his staff have been nothing but helpful. I had surgery 8 weeks ago and every day I get a little stronger. Dr. Clanton is amazing!

by Anonymous on Thomas Clanton, MD
He changed the way I'll be able to live my life now

I have been a patient of Dr. Clanton for 15 months. I went to him after 2 failed surgeries. He didn't push surgery on me. We tried a few other things first. It did become apparent that I needed surgery. I had surgery 8 weeks ago and every day I get a little stronger. He is an aamazing surgeon with passion for what he does and cares about each individual patient. He changed the way I'll be able to live my life now.

by Sally deBeque Smith on Thomas Clanton, MD
He is so gifted, honest and humble

Thank goodness I was blessed to have Dr Clanton do my second ankle surgery. He is so gifted, honest and humble. The staff is also as good and capable as he is and focused on getting you the very best surgical result.

by Dean on Thomas Clanton, MD
Outstanding all around

Outstanding all around. Dr. Clanton, along with his team, exceeded my expectations. A great experience and great outcome after surgery.

by Dallas Hixson on Thomas Clanton, MD
"he is the best"

Such a blessing and an unbelievable experience at the Steadman Clinic and at Vail Valley Medical Center. My son broke his ankle snowboarding and we were referred to Dr. Clanton from Dr. Podgorny at Beaver Creek Medical. I was told by a half dozen people on the way to see him that "he is the best." He evaluated my son and performed surgery a day later. The most comforting part was when he prayed with my son and me before they took him back to do surgery. Dallas Jr. is doing fantastic and he will be back to playing baseball in about 8 weeks. Our doctor in Louisiana did the post OP visit and said the surgery and the repair were AWESOME - its great to have our doctor at home be so complementary of Dr. Clanton and his work. We are so blessed and grateful Dr. Clanton was our doctor!!!